The Phantom Choir of Roan Mountain

Roan Mountain stands right on the border between North Carolina and Tennessee, about one hour west of Banner Elk. Roan Mountain is not just one mountain, but a five-mile long ridgetop that reaches it's highest elevation a Roan High Top nearly two miles above sea level. This long ridge is covered with shady balsams and rhododendrons that fill the hills with beautiful patches of pink and white when they're in bloom. But some people say that there's more than immediately appears along this high ridge. Some say that on the heights of Roan Mountain supernatural voices can be heard.

The wind is powerful on Roan Mountain. In 1799, the survey team that was sent out to determine the border between North Carolina and Tennessee noted when passing through the area that the wind had worn large holes in the face of the rock on top of the mountain. As European settlers began to descend on the area in the early 19th Century, stories soon began to be told that the wind that whipped around Roan Mountain carried something else with it. They said that when you stood at the highest points along the ridge, you could hear voices singing in the wind. 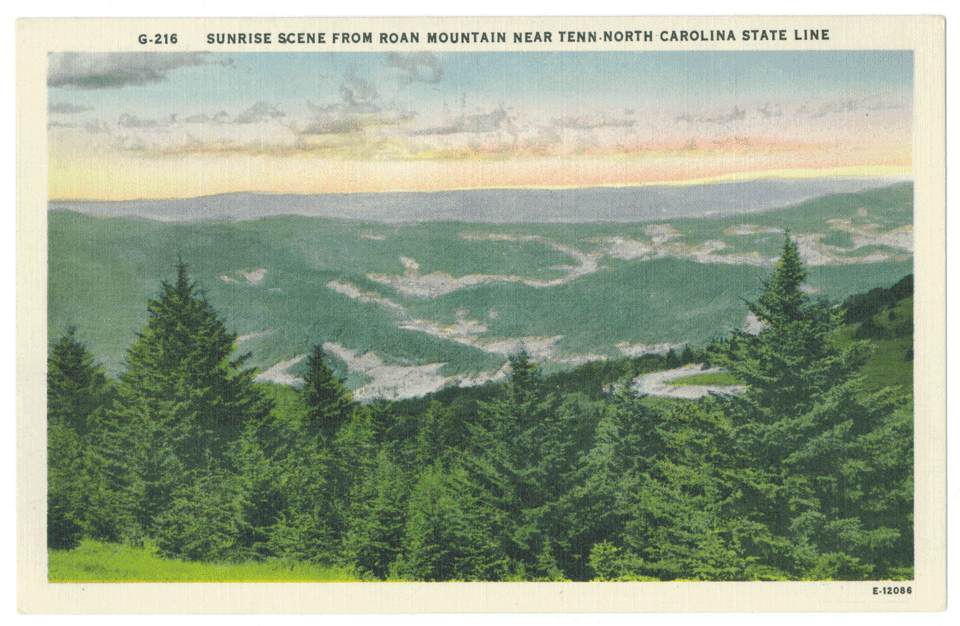 Roan Mountain, North Carolina, in a vintage postcard. From the author's collection.

But no one agreed what kind of singing it was. Some said it was the sound of a beautiful angelic choir, that the voices were ones of heavenly beauty. Some said that Roan Mountain was the place where the angels gathered to practice singing for the Christian Judgement Day, that on Roan Mountain could be heard the sounds of heaven.

In 1878, Colonel John T. Wilder, a Union Army officer during the Civil War who had settled in Tennessee after the fighting had stopped noticed the growing attraction of the Blue Ridge Mountains as a tourist destination. By that time, Asheville and Hot Springs were both already well-established stops for people seeking beautiful views and cool summer air. Wilder realized that Roan Mountain had spectacular views, and was also now easily accessible by the newly-built East Tennessee and Western North Carolina Railroad. So Wilder build The Cloudland Hotel on top of Roan Mountain and hoped to draw visitors from across the country.

The 166 room hotel offered full service, beautiful views, and reasonable rates of only $2 a day, $10 a week, and $39 a month. It also sat directly on top of the border line between Tennessee and North Carolina. At that time, consuming and selling alcohol was illegal on the North Carolina side of the property, but legal on the Tennessee side. To keep things straight, a wide white line was drawn down the center of the dining room, even dividing the central banquet table in half, to let patrons know exactly where they could enjoy a drink. According to legend, the Sheriff of Avery County spent a good deal of time hanging around the dining room, keeping his eye peeled for anyone who strayed over the border into North Carolina holding a drink. One foot across the state line would immediately result in a very stiff fine, payable on the spot in cash.

But it was guests at this hotel who had some of the most notable encounters with the strange music of Roan Mountain. Henry E, Colton, a geologist and naturalist visited the mountain in 1878 and there recorded that he did hear a clear and distinct sound "like the humming of a thousand bees" when standing on the mountain. He attributed this sound the electrical energy generated by the friction of air currents rising up from the valley.

Another visitor who trekked out from the Hotel in the late 19th Century had a completely different experience of the phantom music. This young man hiked out onto the mountain on a gloomy day against Wilder's warnings and soon found himself caught in a raging thunderstorm. As the wind around him raged, he began to hear unearthly howls and moans calling from the air around him. He took shelter in a cave, where he found himself confronted by much more than he had bargained for.

In the cave, the voices didn't cease, but grew even louder. The air around the young man soon began to be filled with spectral visions, gashed and torn bodies bearing the marks of torture floated around him. Their screams of torment filled the air, as the hideous shapes danced around him. The man passed out from fear. When he awoke, he found his clothing was torn and as white as if it had been bleached. The man returned to the cave convinced he had seen a vision of Hell.

People say they hear the phantom choir of Roan Mountain singing to this day, and to this day some hear angelic voices and some hear tormented screams. It's said that the sounds are most often heard after a thunderstorm has passed through the valley. Some say that it's the wind moving through the balsams, some say it's something not of this world, and that whether your the voices of angels or demons on Roan Mountain is a taste of what awaits you in the next world.

There's another unusual phenomenon associated with Roan Mountain, although this one is entirely natural. Multiple people have reported seeing circular rainbows in the sky above the mountain. While all rainbows are full circles, rainbows are also very large, and from the perspective of the viewer the arc of the bow is most often interrupted by intersecting with the Earth. While this is something that is often seen by airline pilots flying high above the ground, it's only from very high altitudes when atmospheric conditions are exactly right that the full circle of the rainbow can be seen from the surface. Roan Mountain seems to have just the right conditions to make it one of the few places on the planet where this can happen.

The Cloudland Hotel closed early in the 20th Century, and the building was demolished and the land sold to the National Forest Service. Today, Roan Mountain is protected forrest land and the Appalachian Trail crosses the top of the ridge. Its beauty is open and enjoyable to anyone who cares to take a challenging hike through the hills, and to anyone who may be prepared to hear voices singing to them from outside of this world.