Pokeweed, also called Polkweed, is a herb indigenous to North America that can grow up to ten feet tall, and is noticeable for its purple-tinged leaves and berries that ripen to a dark, vivid purple. The plant, its berries, and its root are toxic and can cause symptoms ranging from vomiting to death. So if you are even thinking about trying anything you are about to read, that's a really bad idea. We can't stress this enough. Poke can kill you.

Despite its potential for harm, Poke berries and poke root were used as medicine and even food for centuries throughout the southern United States.

The plan't medicinal uses seem to have been introduced to the Europeans and Africans by the indigenous peoples in the early days of settlement. Appalachian tradition held that the medicinal uses of the plant were learned from the Cherokee.

A salve of poke root, sulfur, and lard was used to treat scabies, a parasitic skin infection. The poke here may be an Appalachian addition to an old Irish treatment for scabies, which just involved the sulfur and lard. Either way, the procedure was remembered to be highly unpleasant from those who had undergone it, with the combination of the horrid rotten egg smell of the sulfur and a burning sensation caused by the poke. 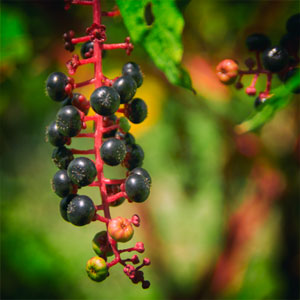 Pokeweed was also used in various forms to treat rheumatism, thrush, and whooping cough. Poke was also used to "thicken the blood," which, while it might sound the most mysterious, is probably also the most effective of these uses. "Thin blood" is a regional description of the tiredness and weakness caused by vitamin and mineral deficiencies. Pokeweed draws unusually high amounts of iron from the heavy clay soil it prefers to grow in, so it may actually have been helpful in addressing iron deficiency, particularly because the prescribed treatment involved eating massive amounts of it.

Poke was also a food, generally a food of poverty. The toxins in the plant can be rendered inert by lengthy boiling, although even in its detoxified form the plant can still cause vomiting, cramping, and sever diarrhea when eaten. Again, do not try this at home. The leaves of the plant were boiled, and then fried in lard, sometimes along with some eggs and served with vinegar to make poke sallet, sallet being an archaic form of the word salad. This dish was brought to the wider attention of the nation by singer / songwriter Tony Joe White in 1969 with his song Polk Salad Annie, and to even wider attention when Elvis preformed it on his 1970 Live at Las Vegas TV special. Poke Sallet was such a widely consumed foodstuff that canned polk salad was sold in the South in the first half of the 20th century.

Poke berries have also been brewed into wine, although most accounts this was a wine which was sought after more for its medicinal value, particularly as a treatment for rheumatism, than for its flavor.

Perhaps unsurprisingly, a plant that was potentially poisonous and that was seen to be foraged by women also had associations with magic and witchcraft. It was thought that the Pokeberry would bloom unnaturally every year on the night of January 6th, Old Christmas or Twelfth Night, the day Christmas was, and is, celebrated in Amish and Pennsylvania Dutch communities.