The Duel at Hammock House

Hammock House stands in the historic heart of Beaufort, North Carolina, a few hundred yards from Taylor Creek. The house was built in the early 18th century and is thought to be one of the oldest houses in North Carolina. Even though a porch stretches along the full length of each of the house's two stories soaking in the warm summer breezes might suggest otherwise, the house wasn't named for the comfortable rope-net beds. Hammock is a slightly antiquated word for a low hill. Before the town built up around it, the low rise on which Hammock House stands was noticeable enough that it was used as an aid to navigation for ships coming in from the sea.

In its early days, Hammock House was an Inn, serving as a resting place for people passing in and out of Beaufort, and according to some Blackbeard was among those who visited the inn. It's from the house's early days as an inn that the legend of a fatal, mistaken duel comes.

In the later part of the 18th century, Beaufort was a busy commercial port, connecting North Carolina to the colonies in the Caribbean, to New England and Canada, and back across the ocean to England. Among the captains who commanded the ships sailing in and out of the waters before the Revolutionary War was a certain Captain Madison Brothers.

Madison Brothers was reportedly an able and competent captain and merchant, who grew wealthy from his trading along the paths of the Atlantic. But Brothers did have one flaw, he was said to have had a fierce temper, and he would fly into a rage at the least provocation. For this, Madison Brothers earned the nickname "Mad" Brothers.

As he grew older, Mad Brothers decided that the time was approaching for him to get married. He sought up and down the coast for a woman willing to be his bride, despite his fierce temper, and eventually found Miss Samantha Ashby. Miss Ashby was the orphaned daughter of a wealthy Baltimore family. After a brief courtship, she agreed to be his wife.

Brothers arranged for her to travel by stagecoach down to Beaufort, and to stay in the Hammock House Inn before the wedding. Mad Brothers would complete his planned trip, and when he arrived back in Beaufort the two of them would be married.

Miss Ashby arrived in Beaufort on time, where she found a pleasant surprise waiting for her. A British Navy ship had docked in Beaufort that morning, and on that ship was her brother, a Lieutenant Carruthers Ashby. Miss Ashby and her brother spent the next few days catching up on old times, dining and laughing together, strolling through the streets of Beaufort.

On the night before Lieutenant Ashby's ship was scheduled to depart, a send off party and dance was arranged at Hammock House for the ship's officers. Food was prepared, a band was brought in, and everyone was excited for what was expected to be the social event of the year in this small colonial town. Lieutenant Ashby and his sister were given pride of place at the event in honor of Miss Ashby's upcoming wedding.

But just as the party started getting underway, Mad Brothers ship pulled into port. As his men secured his vessel, he looked out across the waters and saw the lights at Hammock House blazing. Anxious to see his bride to be, he gathered a small group of men in a launch and rowed up Taylor Creek to the house.

Captain Brothers led his men immediately into the ballroom at Hammock House, where he saw his wife-to-be dancing in the arms of a handsome young sailor.

Mad Brothers immediately flew into a rage, and ripped Miss Ashby from her brother's arms. Before anyone could explain, Brothers had drawn his sword and was viciously attacking the young sailor. The man had no choice but to defend himself, as Brothers' men had drawn their weapons and were warning off the crowd from interfering in the fight. Lieutenant Ashby drew his own sword.

Brothers' rage was so great that he was deaf to the cries of everyone in the room to the terrible mistake he was making. He slashed madly at Lieutenant Ashby, who did his best to keep Brothers' blows from striking but did not want to harm the man who would soon be marrying his sister.

Brothers drove Ashby across the ballroom, out into the lobby, and started pursuing him up the stairs. Finally, Ashby was cornered, and realized he had no choice but to lunge out. But his balance was off on the narrow stairs, and he trupped and fell on his back. Mad Brothers showed no mercy. He drew the knife from his belt and stabbed Ashby through the heart.

As her brother lay dying, Samantha Ashby rushed to his side. Brothers spat in her direction, gathered his men, and rowed back to his ship. He sailed away before dawn the next morning, and never set foot in Beaufort again.

And it's said that the blood that stained the stairs in Hammock House where Lieutenant Ashby was murdered can still be seen.

Hammock House is now a private residence located on Front Street in Beaufort. The Old Burying Ground Cemetery is located nearby off of Ann Street. The grave of the sailor who was buried standing up can be found near the back of the Cemetery, close to the Purvis Chapel AME Zion Church. However, the grave marker doesn't give the name of the grave's occupant, only stating British Naval Officer, buried standing in salute to His Majesty King George 3rd. 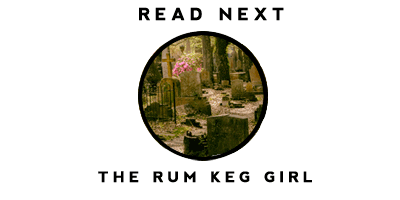